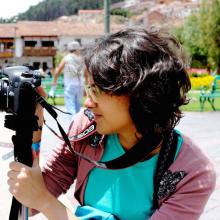 Patricia is an anthropologist and filmmaker whose scholarly research and creative practice develops in the folds between ethnography, critical theory, and the documentary arts. Her most recent works converge on issues of gender and ethnic representations in neoliberal, post-authoritarian Peru. She completed her Ph.D. in Cultural Anthropology with a Designated Emphasis in Film and Digital Media, and her BA in Anthropology from the University of Puerto Rico, Rio Piedras.

She is currently working on an ethnographic book project Moral Fibers: Making Fashion Ethical and screening her documentary film Entretejido. Both projects critically explore the Peruvian alpaca wool supply chain analyzing how, through the intervention of development projects, indigenous women artisans and their aesthetic traditions are interpolated into “ethical fashion” manufacturing networks. Moral Fibers unites the fields of political economy, ethnic studies, aesthetic theory, and gender studies to expand our thinking about the parameters and exclusions encoded into “ethical capitalism.”

Her film Entretejido weaves together the different sites and communities involved in this supply chain, bringing viewers into contact with the ways objects we wear are entangled in national racial politics and histories. The film, which premiered at the Havana International Film Festival, extends her long-standing critical engagement with aesthetic politics, sensorial and embodied forms of knowledge.

At Rice, Patricia will begin researching the environmental dimensions of alpaca agribusiness. Drastic climate change in the Andean highlands has effected herding practices, grazing patterns, and the survival of these animals due to rising winter temperatures and the fast melting of glaciers, an important source of water for communities. This project seeks to understand the rapid development of this industry at a moment where climate change is having a direct impact in local ways of life and traditional practices of alpaca care. Patricia is also working on a series of film collaborations that explore Puerto Rico’s colonial history and the current economic crisis that has led to the imposition of a US-led fiscal control board.