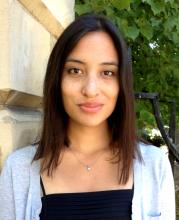 Myrna uses historical research to examine the relationship between the science of evolution and its role in public culture. She received her Ph.D. from the Department of the History of Science at Harvard University and her B.S. in Biology form Westmont College. Her work explores themes in the history of biology, gender studies of science and religion, and U.S. history. She is currently working on her first book (working title, Stephen Jay Gould: An Evolutionary Heretic), which uses the career of Harvard biologist Stephen Jay Gould to examine the impact of American creationism on debates within modern evolutionary biology. Taking Gould as a lens, the book examines the role of evolutionary science in public debates over gender, race, and democracy in the U.S. during the last quarter of the 20th century. She has published on Gould in Studies in the History and Philosophy of Science, Part C and Endeavour. Related to these themes, she is also working on a co-edited volume with Ahmed Ragab and Sophia Roosth called Scientific Orthodoxy: Science, Religion and the Limits of Truth.

At Rice, Myrna worked on a project examining the role of evolutionary psychology in the development of gender definitions and identity in American Christianity. The core of this project contends that scientific and religious discourses must be studied together in order to understand changing conceptualizations of sex, gender and sexuality in U.S. culture. More on this project and the rest of Myrna's work can be found on her website.