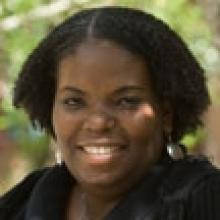 Kimberly Juanita Brown received her PhD from Yale University, and is currently Assistant Professor of English at Northeastern University.  She teaches courses on African American and African Diaspora literature and 20th century visual culture. Her dissertation, "The Repeating Body: Literary and Visual Reiterations of Black Feminine Strength," won the Sylvia Ardyn Boone Prize from the History of Art Department at Yale. The book manuscript she developed from that dissertation while at Rice is under review with University of North Carolina Press.

Also while at Rice, she began conceptualizing her second project on ocular exclusion and national subjectivities.  Tentatively titled "Archives of Indifference: Visual Murder and the American Eye," the project examines images of racialized dead bodies in the New York Times during the tumultuous middle years of the 1990's.

For the 2011-2012 academic year, she will hold a Woodrow Wilson Career Enhancement Fellowship, during which she will be a Visiting Scholar in Gender Studies at the Pembroke Center for Teaching and Research on Women at Brown University.

In addition to her scholarly work, she looks forward to the publication of two of her poems in the journal Meridians, "For the Lost" and "So You Die Slowly."