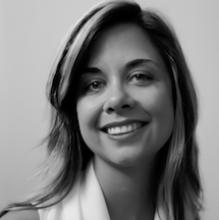 Jennifer Tyburczy is Associate Professor of Feminist Studies at the University of California, Santa Barbara.

Her book Sex Museums: The Politics and Performance of Display was published by the University of Chicago Press in 2016. Sex Museums combines ethnographic field methods such as participant observation and interviews with archival research and visual art, performance, and film analysis to argue that the museum context from its inception to the present day is a pivotal but overlooked site in the construction of modern sexual subjectivity and the categories of “normalcy” and “perversity.”

Tyburczy received her Ph.D. in performance studies from Northwestern University in 2009 and her M.A. in English Literature from the University of Texas, Austin in 2003. From 2010-2012, she was the postdoctoral fellow with us at the Center for the Study of Women, Gender, and Sexuality. In 2012-2013, Tyburczy spent the academic year in Mexico City on a Fulbright-García Robles Grant with an institutional affiliation at El Colegio de México (COLMEX), in particular their Interdisciplinary Program in Women’s Studies. During this time, she conducted research for her second book project, "Sex After NAFTA: Crossing Borders and the Economy of Intimacy." This project traces the impact of the North American Free Trade Agreement (NAFTA) on everyday practices of intimacy and argues that “free trade” dramatically changed how intimacy is constructed and experienced in the United States and Mexico in the twenty-first century, what Tyburczy calls “the economy of intimacy.” The book manuscript will demonstrate how the mechanisms of “free trade” are delicately interwoven with national and international notions of what sex and sexuality mean.

Tyburczy’s scholarship has appeared in peer-reviewed journals such as Women and Performance: A Journal of Feminist Theory, Journal of Literary and Cultural Disability Studies, Radical History Review, Criticism: Quarterly of Literature and the Arts, and Text, Practice, and Performance, and book anthologies such as Negotiating Sexual Idioms: Image, Text, Performance and LGBTQ America Today. In addition to her work as a teacher and a writer, Tyburczy is also a performance artist and a museum curator. She has performed in Austin, Chicago, and Houston, and while working as the Director of Programming at the Leather Archives and Museum in Chicago, she curated several exhibitions that explored the intersection of race, transgender identity, disability, and sexuality. In 2015, Tyburczy’s exhibition Irreverent: A Celebration of Censorship will open at the Leslie Lohman Museum of Gay and Lesbian Art in New York.