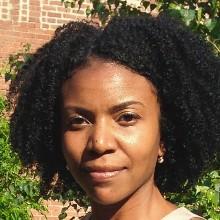 Jalylah Burrell is a writer and scholar of American and African diasporic literature, music and popular culture. She received her PhD in American Studies and African American Studies from Yale University and was most recently the Ida B. Wells-Barnett Postdoctoral Fellow in the department of African and Black Diaspora Studies at DePaul University. Her research seeks to make visible the work of cultural producers who have been absented from popular and critical engagement by virtue of their identity positions and to further understand the mechanics, politics and legacies of their aesthetic strategies.

Jalylah is currently at work on her book project, Capacity for Laughter: Black Women and the American Comedic Tradition. An interdisciplinary study of race, gender, and comedy in the United States after 1974, the date of the first convening of the Combahee River Collective, Capacity for Laughter examines black women’s employments of humor as a mode of black feminist thought. The study recovers a history of black women humorists in literature, music, stand-up comedy, activism, film, comic strips, television and social media; delineates a vital and enduring tradition of comedic practice pursuant of the oppressive ideologies that girded, developed and continue to promulgate politics and culture in the United States of America; and details the strategies black women humorists have used to negotiate this American comedic tradition, as well as the humorous practices they innovated to render identity complex and intersectional.

A music critic, oral historian and deejay, Jalylah’s investments in public scholarship have been informed by her experience as an early hip hop blogger; columnist and contributor to Vibe, XXL, Fader, Portland Mercury and Village Voice among other publications; and host of the long-running WYBCx radio show There Ought To Be More Dancing. Her music mixes have been commissioned by the Brooklyn Public Library, the Spelman Museum of Fine Art and the International Association for the Study of Popular Music.

In Fall 2020, she will be joining the department of African American Studies at San Jose State University as an Assistant Professor.