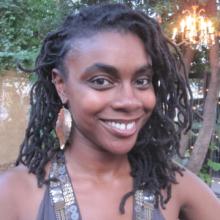 Courtney Desiree Morris completed her doctorate in the African Diaspora Graduate Program in Social Anthropology at the University of Texas at Austin in May 2012. Morris also holds a certificate in gender studies and has an extensive background in community based research and activism. Her research has focused on Afro-Nicaraguan women's activism in post-Sandinista Nicaragua. Morris has done extensive ethnographic field research on both the Atlantic and Pacific regions of the country and her analysis will offer new insights into the racialized dynamics of feminist politics in contemporary Latin America. Morris' theoretical contribution, drawing from black feminist traditions and current debates in critical race theory, offers new insights to women's and gender studies, and places several of these conversations in transnational perspective.

Morris' work in Latin America will be a welcome contribution to Rice's new Latin American Studies major and her engaged approach to research and teaching will create several synergies across campus and within the School of Humanities. During her time at Rice, Morris plans to develop a new research project focusing on the ways in which U.S. minority populations have come to figure prominently in the U.S. military, particularly in an era of neoliberal empire and post-911 militarizations around the world.