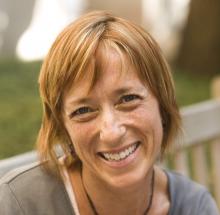 Postdoctoral Fellow Christine M. Labuski was awarded the 2009 SUNY Press Dissertation/First Book Prize in Women’s and Gender Studies for "It Hurts Down There": An Ethnographic Exploration of Genital Pain Syndrome.  The prize includes a publication contract with SUNY Press.  She also has an essay forthcoming in Feminist Studies, titled "Vulnerable Vulvas: Female Genital Integrity in Health and Dis-ease."

Christine is a feminist anthropologist whose work focuses most broadly on the body, particularly on the relationship between cultural dynamics and physiological change. She received her PhD from the University of Texas at Austin.  Her dissertation work examined the affective and material experiences of penetratively-prohibitive vulvar pain in a group of heterosexually-identified North American women.

Before studying anthropology, Christine worked as a gynecological nurse practitioner, earning both a B.S. and an M.S. in nursing. In addition to her abiding interest in sexuality and the female body, her research interests include non-human (primate and robotic) bodies, neurological and somatic anthropology, sexual dimorphism and difference, the anthropology of biomedicine, whiteness studies, and queer theory. She also maintains an active interest in popular culture, including the politics, pleasures and perils of Wal-Mart’s influence in the contemporary U.S. This last project is anticipated to come out in January 2012 in a volume from Routledge titled Walmart and the American Dream.

She is currently an Associate Professor of Sociology at Virginia Tech.