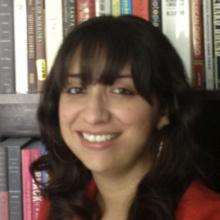 Abigail Rosas completed a post-doctoral fellowship from the Institute for American Cultures in the Chicana/o Studies Research Center at the University of California, Los Angeles. Rosas received her Ph.D. from the Department of American Studies and Ethnicity at the University of Southern California and B.A. in Comparative Studies in Race and Ethnicity and Sociology from Stanford University and has an admirable record of teaching and service within the multidisciplinary fields of ethnic and gender studies. Born and raised in South Central Los Angeles, the activism of resilient Mexican immigrant, Chicana/o, and African American neighbors and friends has been formative to her scholarly pursuits. Rosas' dissertation research focuses on the social and political alliances and histories of interaction between African American, Chicana/o, and Latina/o communities in South Central Los Angeles. Her work bridges cultural and historical studies and centers upon how women in these communities have formed strategic political alliances at multiple levels of institutional engagement.

Rosas' work will make important contributions to the Center by focusing critical attention on Chicana, Latina, and African American women's activism and her multidisciplinary training will enable her to create intellectual bridges between several departments in the School of Humanities and Social Sciences. During her time at Rice, Rosas intends to initiate a new comparative project between activist communities in Los Angeles and Houston, focusing upon both the shared and divergent histories of minority populations in these two cities.