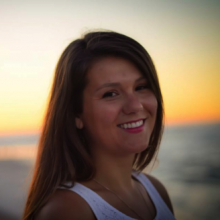 The 2016 Merfish Award was presented to Sam Love '16 in recognition of her sustained commitment and leadership in advancing gender equality and social justice in local and global contexts.

Sam’s on-campus leadership has greatly benefitted the Rice Women’s Resource Center (RWRC). Sam has worked with the RWRC for several years, serving first as Outreach Coordinator in 2014–15 and then as Co-Director in 2015–16. As Outreach Coordinator, Sam sought to forge new and lasting relationships with organizations across campus that mutually achieved the goals of both organizations, such as a panel on race and gender in the Oscars co-sponsored with the Black Student Association. As Co-Director she has worked to integrate all members of the center more fully, creating new opportunities for volunteers to engage with projects they are passionate about. Sam has spearheaded projects and events that engage the campus community in conversations about sexual assault on campus, including widely attended discussion sessions on the Survey of Unwanted Sexual Experiences (SUSE) and the Critical Thinking in Sexuality class. She has also focused on revamping the volunteer training for RWRC volunteers, and creating committees to allow them to more meaningfully interact with coordinators.

Sam was also profoundly shaped by her extensive service experience in Sub-Saharan Africa. In 2014, she was awarded the Susan McAshan Summer Service Internship Award from the Program in Poverty, Justice, and Human Capabilities (PJHC) for service in an elementary school in rural Ghana. Its classrooms were overcrowded, its teachers exhausted, untrained, and overwhelmed. There were extremely limited instructional resources; books and chalk were hard to come by. The school administration had unfortunately come to depend on short-term volunteers like Sam, not expecting these volunteers to actually teach, but to be an extra set of hands that could help keep order during school hours. Sam developed lesson plans that she carefully documented for future volunteers and strived to get to know each of the fourth, fifth, and sixth graders she taught. She was disappointed to discover stark gender inequities. Boys who excelled were publicly praised, but girls’ similar achievements were not recognized. Many girls attended school infrequently, since their labor was needed at home or in family businesses. Sam did her best to intervene, publicly praising girls who achieved, and observed dramatic improvements in the girls’ attendance and schoolwork. As part of the PJHC’s post-internship reflection program, Sam made a digital story of her experience in Ghana that can be viewed at pjhc.rice.edu/samantha-love/.

Sam spent the fall of 2014 in Cape Town where she conducted an engaged research project with Yabonga, a community partner serving HIV/AIDS affected or infected women and children. Working in an after school program for children ages 5–9, Sam quickly noticed that that most of the children struggled to read and write and that the 10-year-old program graduates who were paid tutors struggled to help them. After carefully researching best practices and convening focus groups of tutors and program leaders, Sam developed a literacy curriculum in consultation with program leaders, participants, and local advocates. As she had in Ghana, Sam worked closely with organizational leaders and community members in an effort to ensure that her lesson plans and programs would continue after she left.

Sam has also served girls, women, and boys locally. Working with Houston’s Partnership for the Advancement and Immersion of Refugees (PAIR), she mentored middle-school girls who are recent refugees from Iraq. She also tutored children at Houston's Star of Hope Homeless Shelter, and taught algebra at Breakthrough Austin, a college-prep program for talented students from under-performing schools. Sam will continue to serve in disadvantaged communities after graduation as a Teach for America corps member.