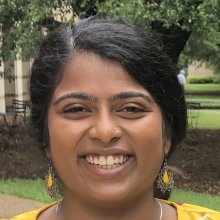 The 2019 Merfish Award is presented to Navya Ravi Kumar for her commitment and leadership in advancing social justice, gender equality, and sexual health on campus, in Houston, and beyond.

Navya graduates with a Sociology major and a certificate in Civic Leadership.  In her sophomore year: she served as a Diversity Facilitator where she organized presentations on diversity for O Week.  She was an Alternative Spring Break Site Leader where she led a group of 12 students to Washington, D.C. focusing on reproductive justice and gender equity.  During that trip, she and other students met with Senators Ted Cruz and John Cornyn to deliver a statement in opposition to the nomination of Neil Gorsuch to the US Supreme Court.

In her junior year, she served as the Alternative Spring Break Ambassador for the Center for Civic Leadership where she trained members of the Rice community to aid the Rice Harvey Action Team and served as site leader for the Alternative Spring Break National Conference in Keene, NH.  She was also a member of Rice's Sexual Health Accessibility Task Force, and organized End the STIgma week with activities to promote sexual health education and STI testing among students.

She has also served as an intern at the USAID Bureau of Global Health working in the Maternal and Child Health Division where she developed a 24 country fact sheet with visualizations of routine immunization polio eradication, and participated in meetings regarding a strategic framework for USAID Maternal and Child Health, Global Polio Eradication and Maternal and Child Survival.  She has also currently worked as a public affairs intern with Planned Parenthood Gulf Coast where she is completed her Civic Leadership Certificate Capstone working to strengthen the connection between community members, their representatives and the lobbying process.