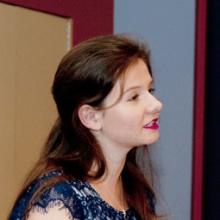 The 2015 Merfish Award was presented to Kendall Post '15 in recognition of her sustained commitment to issues of social justice for women. Kendall's academic work as a CSWGS major is a testament to her investment in forging connections between intellectual work and community involvement. In the Introduction to LGBT studies in the spring of 2013, Kendall worked with a group of peers to conduct an oral history interview of Rosemary Cloud, then president of PFLAG-Houston. The resulting video, which highlighted the roles that straight women and allies have had in LGBT communities, made such an impression on PFLAG-Houston that Kendall was invited to present and screen the film at one of their monthly meetings.

Kendall's commitment to research geared toward social justice was further evidenced in her project for the Seminar and Practicum in Engaged Research: "Sex, Relationships, and Consent at Rice University." Kendall's project documented attitudes and experiences related to sexuality and sexual violence among Rice undergraduates and served as a catalyst for university-wide discussions about the impact of sexual violence on campus. This project was, additionally, the foundation for her senior Honors Thesis: "Title IX and Sexual Violence: An Institutional Ethnography of Rice University."

In addition to her academic work, Kendall has demonstrated a commitment to social justice for women outside the classroom. In the summer of 2013, Kendall participated in a Leadership Rice internship, in which she worked with the Center for Excellence in Disparities Research and Community Engagement (CEDREC) at Weill Cornell Medical College in New York. While in this highly competitive program, she performed independent research on perinatal health and diversity pipeline programs in biomedicine while contributing to CEDREC's ongoing projects. That work even resulted in authorship credit for a publication in the journal AIDS Education and Prevention. Kendall has also worked as a volunteer with the Ben Taub Patient Discharge Project and has been an active member of the Rice Women's Resource Center, serving as Advocacy Coordinator for the 2013-2014 academic year and as Co-Director for 2014-2015.

In her time at Rice, Kendall has worked in the classroom and out, off campus and on, to improve the position of women by understanding the role of gender and the power relations that shape individual women's life outcomes.  We are delighted to honor her and her work with the Merfish Award.