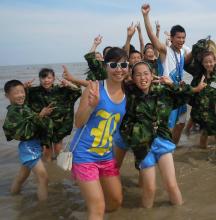 Joyce Chou '14 was awarded the 2014 Merfish Award in recognition of her dedication to improving conditions for migrant communities and increasing access to education for women and girls. During her time at Rice, Joyce served as a tutor for a variety of programs, including the Habitat for Humanity Teaching Committee, the Partnership for Advancement and Immersion of Refugees, and the Pleasant Hill Leadership Institute. In 2011, she joined a group of Rice students to serve at a daycare in Huancayo, Peru, where she assisted classroom teachers as well as designing and completing a mural for the students. In 2012 and 2013, Joyce also participated in Alternative Spring Break trips to Chicago and San Francisco.

As a PJHC minor, Joyce participated in two international summer service internships. In 2012, she received a Susan McAshan Summer Service Internship to work with vulnerable children and teens on the outskirts of Dar es Salaam, Tanzania. In this position, Joyce tutored girls and women who were returning to school after having been forced to end their educations due to pregnancy or work. Additionally, in 2013, Joyce was awarded the Loewenstern Fellowship to support her service at a school for the children of rural migrants on the outskirts of Shanghai. In addition to teaching Englihs and leading a mural-painting project at the school, Joyce conducted research on the backgrounds of the students and their families, developing a demographic survey with a focus on alleviating gender disparities in access to education.

After graduation, Joyce continued her commitment to expanding access to education for women and girls in her work as a 2014-15 Fullbright English Teaching Assistant in Taiwan. She also had the opportunity to work closely with Chinese migrants to Singapore through funding from the Wagoner Foreign Study Scholarship.