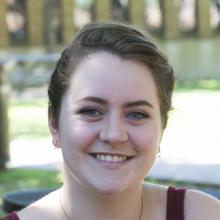 The 2017 Merfish Award was presented to Bridget Schilling ’17 in recognition of her sustained commitment and leadership in advancing social justice, gender equality, and inclusivity on campus, in Houston, and beyond.

Bridget commenced in 2017 with a double major in Ecology & Evolutionary Biology and Policy Studies, a minor in Poverty, Justice & Human Capabilities, and a Certificate in Civic Leadership.  In 2018, she plans to complete the last year of the Rice-UT Public Health Scholars “4+1” program, which gave her a head start toward a Master’s in Public Health from the University of Texas. For her Master’s, she will major in Health Services Organizations within the Management, Policy, and Community Health program, focusing on policy implementation in under-resourced areas of public health.

Bridget has worked tirelessly within the Rice community to support victims of sexual violence as a STRIVE liaison and, as the director of the Women’s Resource Center, to raise awareness of sexual health. Some of her other on campus efforts include contributions to the Critical Thinking in Sexuality seminar that began in spring 2017, four years of performances in the Vagina Monologues, and her service on the Central Committee for Lovett College.  She has also served as president of Rice for Reproductive Justice, which organizes events in support of reproductive rights and sexual health advocacy.  Demonstrating her deep commitment to inclusivity, Bridget has worked with the Boniuk Council, a campus interfaith group; from fall 2015 through spring 2016, Bridget served as Coordinator for their 2016 Interfaith Week.  She also joined the Student Association Wellbeing Committee after realizing that many students have not been tested for STIs because of the cost. In spring 2016, she helped start an initiative to reduce the cost of STI testing on campus and encourage students to use the service.

Beyond campus, Bridget has worked as a Planned Parenthood Generation Action intern from 2015 to 2016. Through a Civic Leadership Capstone project with the Pleasant Hill Leadership Institute, Bridget established guidelines for an evidence-based curriculum and training manual for a healthy relationships and violence-prevention program for middle school and high school students. In May 2015, she led a group of nine students on a service trip to Bulgaria. That group focused on food banking and food security, and Bridget also led efforts to raise funds for the trip and for the food bank they worked with. Bridget also participated in Rice’s Alternative Spring Break (ASB) program in 2014 and 2016, working with various organizations in San Francisco focused on HIV/ AIDS prevention and treatment. She served as an ASB Site Leader from 2015-2016, working with the Nehemiah Neighborhood Center and the Pleasant Hill Youth Ministries in Houston to understand how faith-based organizations play a role in supplementary education. In the summer of 2016, Bridget was a Policy Intern at the Texas Fair Defense Project conducting policy research on “debtor’s prisons” that hold people for misdemeanors because they are unable to pay bail or fines.  Also, since the summer of 2013 Bridget has worked as an intern for the international health consulting firm ICF International, where her work has focused on public health issues pertaining to HIV/ AIDS, including data entry and research from the local to the global scale, collaboration with the CDC on global initiatives, and outreach to centers around North America.