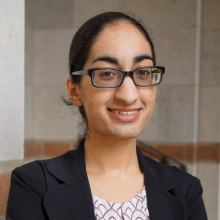 The 2019 recipient of the Balkishan Award is Sharan Kaur Mehta, a graduate student in Sociology, for her paper titled “Negotiating Race in a Climate of Islamophobia: How Muslim and Sikh Americans Perceive Discrimination and Construct Racialized Religious Identities.”

Since 9/11, hate crimes have increased against Muslim Americans and those perceived to be Muslim, such as Sikhs. However, crime reports often fail to capture how racism and Islamophobia shape the lived experiences of racialized religious minorities. Mehta's paper examines how Muslim and Sikh Americans perceive experiences of discrimination, the effects those experiences have in their daily lives, and how perceived discrimination shapes the construction of racialized religious identities. Based on interviews with 14 Muslim and 16 Sikh community members and participant observation at a masjid (mosque) and gurdwara (Sikh place of worship) in Houston, Texas, Mehta documents how perceived risk of being discriminated against shapes life “choices” and chances. She finds that Muslims and Sikhs engage a complex negotiation between blending in and standing out that embeds gendered, religious and racial meanings into visible and invisible religious symbols.