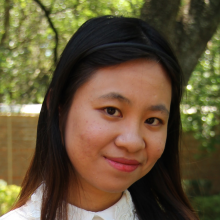 The 2017 recipient of the Seth Balkishan Das Singhal Award is Di Di, a graduate student in Sociology, for her paper "Navigating Gender Norms: “Doing Gender” in Buddhist Temples in Mainland China and the US."

In that paper, Di takes a transnational comparative perspective to analyze how gender is produced in liberal religious communities. Her data came from participant observation and 80 in-depth interviews in two liberal Buddhist temples, one in mainland China and the other in the US, both affiliated with the same Buddhist headquarters. Her findings reveal that, while both temples offer mixed gender ideologies—one explicit but abstract; the other permeated but pragmatic – practitioners’ responses to these gender norms are divergent.  She argues that Buddhists in the Chinese temple form “symbolic egalitarian and pragmatic traditional” gender schemas that express “symbolic agency” while their counterparts in the US construct “pragmatic egalitarian” gender schemas to express “pragmatic agency.” She suggests that, for practitioners in liberal religious organizations, gender schemas are constructed through an interaction between gender norms in the sacred and secular worlds, revealing that the gender-religion intersection, and the dialectical relationship that bolsters it, is conditioned by social contexts.