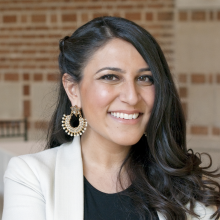 On April 6, 2017, CSWGS was pleased to honor Noorain Khan '06, with our Distinguished Alumna Award.  Currently a Program Officer for the Ford Foundation, Noorain graduated from Rice with a triple degree in Political Science, Religious Studies, and the Study of Women, Gender, and Sexuality, for which she wrote an honors thesis titled "Public Image; Private Identities: Veiling American Muslim Women."  After graduating, Noorain received a prestigious Rhodes Scholarship.  She earned an MPhil in Migration Studies while at Oxford, and continued to Yale Law School to receive her J.D. in 2011.  She has appeared on Forbes 30 Under 30 list, and received the Legal Aid Society's Pro Bono Publico Award for her commitment to volunteer legal services for the poor and disadvantaged.  We were delighted to honor her, and cannot wait to see what she will do next!