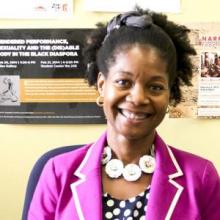 She is the author of Dangerous Creole Liaisons (2016) and she has produced critical and annotated editions of novels by Auguste Traversay de Sansac and Jenny Manet for L’Harmattan, one of the major French publishers. Her current book project is entitled Sex, Sea, and Self: Sexuality and Nationalism in French Caribbean Discourses 1924-1948, which is under contract with Liverpool University Press, and she is also co-editor for a special issue on Afroféminisme (Black feminism) for the Australian journalEssays in French Literature and Culture, which will appear in 2019.

Her research and teaching interests delve into the transatlantic and transnational interconnection between cultural productions from continental France and its now former colonies. In so doing, she explores constructions of gender, race, sexuality, identity politics and nationalistic awareness. A central theme of her research is how local knowledge in the colonial and post-colonial eras has shaped the literatures and the awareness of the self in former French colonies through specific representations of sexuality, and she has received grants from foundations, such as the Volkswagen Stiftung.

A highly regarded teacher, she received several teaching awards at the University of Kentucky, and she also has directed study-abroad courses in Morocco, France, and on Martinique.