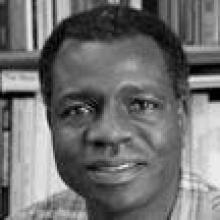 Elias Bongmba combines his teaching of African religions and his research in theology and philosophy of religion working with African philosophical ideas and Continental philosophy. His first book, African Witchcraft and Otherness: A Philosophical and Theological Critique of Intersubjective Relations, explored intersubjective relations by probing the ethics of witchcraft using the philosophy of Emmanuel Levinas. His second book, The Dialectics of Transformation in Africa (Palgrave Macmillan, 2006), discusses the political aspects of intersubjective relations through an analysis grounded in the human sciences won the 2007 Franz Fanon Prize for outstanding work in Caribbean Thought. His book, Facing a Pandemic: The African Church and the Crisis of AIDS (Baylor UP, 2007), offers an interdisciplinary analysis of HIV/AIDS and he argues that the motif, the image of God  invites religious communities in Africa to scale up the fight against HIV/AIDS at the local and national level through an ethic of love and compassion.
Professor Bongmba is editor of The Wiley Blackwell Companion to African Religions, 2012. The Routledge Companion to Christianity in Africa, (2015). He is also Co-Editor of Living on the Edge: Essays in Honour of Steve de Gruchy Activist & Theologian, eds. James R. Cochrane, Elias Bongmba, Isabel Phiri, Des van der Water. (Pietermaritzburg, South Africa: Cluster Publications, 2012). Bongmba has published dozens of peer reviewed articles and book chapters, and served as guest editor to special editions of Religion and Theology.
Bongmba is President of the African Association for the Study of Religion, Managing Editor of Religious Studies Review, Member of the African Studies Association, and the American Academy of Religion.

We are also delighted to share that Professor Bongmba has received the 2020 Ray L. Hart Service Award from the American Academy of Religion.