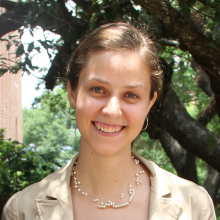 The 2016 recipient of the Seth Balkishan Das Singhal Award is Simranjit Khalsa, a graduate student in Sociology, for her paper "Defining Sikhism: Boundaries of Religion and Ethnicity Among Sikhs in the United States."

In that paper, Khalsa describes how U.S. immigration patterns include rising numbers of non-western religious practitioners whose religious and ethnic identities are linked, and there has been a concurrent rise in white Americans converting to these faiths. She argues that research on religious-ethnic traditions has not addressed how communities of white converts impact religious-ethnic traditions. Her paper examines this phenomena specifically among US Sikhs, comparing members of two Sikh communities. She asks how they construct their Sikh identity and what boundaries they draw around this identity, drawing on participant observation and 31 in-depth interviews with both Indian Sikhs in Houston and members of Sikh Dharma, a predominantly white Sikh community. She finds that respondents in each community draw on the same elements (symbols, practices, values) to construct Sikh identity, however, they diverge in regards to the specific practices they emphasize. Differences in religious practice become boundaries between respondents, separating Indian Sikhs and members of Sikh Dharma along both religious and ethnic lines. Furthermore, members of Sikh Dharma redefine both Sikh practice and the boundaries around Sikhism, despite the dissent of Indian Sikhs. Her findings suggest that white practitioners of non-white religious-ethnic traditions have outsized agency in defining Sikhism for themselves and the broader American public.