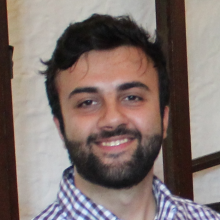 In May 2015, the Center for the Study of Women, Gender, and Sexuality was pleased to give the inaugural Seth Balkishan Das Singhal Award to CSWGS Graduate Certificate student Reza Hashemitaba for his paper titled “Cosmetic Surgery, Piety, and Islamic Authority in Iran.”

Cosmetic surgery is as common a practice in many Middle Eastern and Muslim-majority countries as it is in other parts of the world. Iran has been said to have one of the highest, or the highest, rates of rhinoplasty in the world.  According to Shi’i doctrine and Iranian law, the only surface of the body that women are allowed to publicly expose is the face. The nose of the practicing Muslim women thus has the strange opportunity to be the seat of cosmetic surgery, beauty, and as Hashemitaba's paper demonstrates, public piety.  His paper draws upon his study of women who had undergone nose jobs in Iran to revisit the connection of the ethical self and Islamic tradition.  He contends that rhinoplasty has provided a space for cosmetic-spiritual experience for some women in Iran, a space where consumer aesthetic imaginary and Islamic law shape individuals experiences and narratives in different ways.