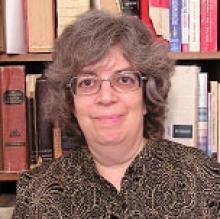 Diane Wolfthal is an art historian specializing in late medieval and early modern art. She has authored four books, two of which concern the history of sexuality: Images of Rape: The "Heroic" Tradition and its Alternatives (Cambridge University Press, 1999; paperback, 2000), and In and Out of the Marital Bed: Seeing Sex in Late Medieval and Early Modern Art (Yale University Press, 2011), which examines the intersection of sexuality and gendered spatial topography and the links between images of licit and illicit sexuality. A recent
publication in this field is an essay titled “From Venus to Witches: The Female Nude in Northern Europe,” and seven catalogue entries in The Nude in Europe during the Renaissance, 1400-1530, a J. Paul Getty
Museum exhibition catalogue).  She is also writing an article on infanticide for a Festschrift volume.

Most recently her research concerns economic issue.  She co-authored an exhibition catalogue on princes and paupers in the work of Jacques Callot, the 17th century printmaker, and an article “Complicating Medieval Anti-Semitism: The Role of Class in Two Tales of Christian Attacks on Innocent Jews," appeared in the Spring 2016 issue of Gesta. She is completing a book "Household Help: Servants and Slaves in Europe and Abroad, 1400-1700" to be published by Yale University Press, and is co-editing a collection of interdisciplinary essays on servants.  She is also curating an exhibition at the Morgan Library on Medieval Money, Merchants, and Morality, for which she is writing the accompanying volume.